The Quantile Regression Problem (QRP) is formulated as a minimization of the sum of absolute differences. Further, QRP is re-formulated as a linear programming problem, which allows for efficient computation. To compute quantiles other than the median the so called “tilted” function is used. (See this Wikipedia entry.)

For a complete, interesting, and colorful introduction and justification to quantile regression I refer to this article:

I recently implemented and uploaded a Mathematica package for computing regression quantiles using Mathematica’s function LinearProgramming — see the package QuantileRegression.m provided by the MathematicaForPrediction project at GitHub. Also see this guide for using the function QuantileRegressionFit provided by the package. The guide has some theoretical explanations and shows how the quantile regression problem can be formulated as a linear programming problem.

Pretending that we don’t know how the data is generated, just by looking at the plot, we might conjecture that the model for the data is 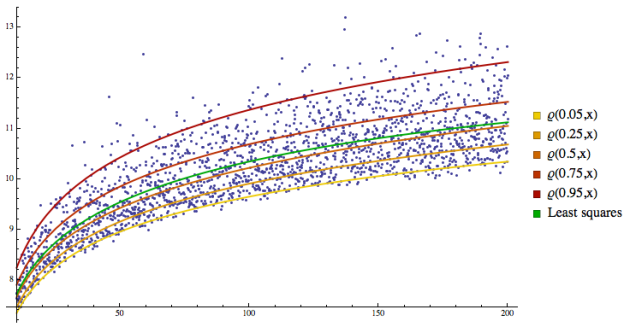 Here is a plot of the with the regression quantiles of a more interesting set of data:

Here is the table for the data partition tests:

I further made some performance profiling tests. First we need to choose a family or several families of test data. Also, since Mathematica’s function LinearProgramming has several methods it is a good idea to test with all of them. Here I am going to show results only with one family of data and two LinearProgramming methods. The data family is the skewed noise over a logarithmic curve used as an example above. The first LinearProgramming method is Mathematica‘s  (default) “InteriorPoint”, the second method is “CLP” that uses the built-in COIN-OR CLP optimizer. I run the profiling tests using one quantile {0.5} and five quantiles {0.05, 0.25, 0.5, 0.75, 0.95}, which are shown in blue and red respectively. I also run tests with different number of model functions {1, x, x^(1/2), log(x)} and {1, x, log(x)} but there was no significant difference in the timings (less than 2%). 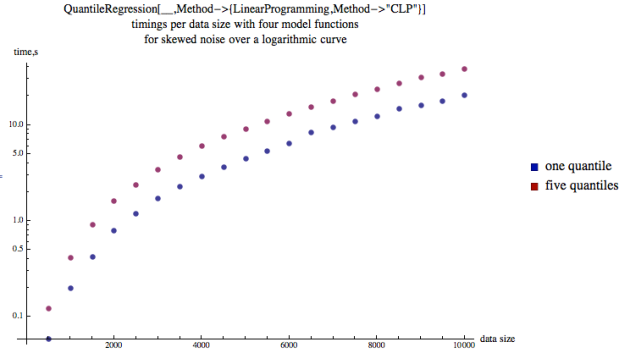 It is interesting to note that the average ratio of the timings with 1 vs. 5 quantiles is 0.38 for “InteriorPoint” and 0.5 for “CLP”.

In another post I am going to show examples of the robustness of regression quantiles when the data has outliers.

Update: Because I implemented calculation of regression quantiles with B-splines I had to rename the function QuantileRegression into QuantileRegressionFit. I made the corresponding changes in the blog post. (Except the profile graphics captions.)

This site uses Akismet to reduce spam. Learn how your comment data is processed.